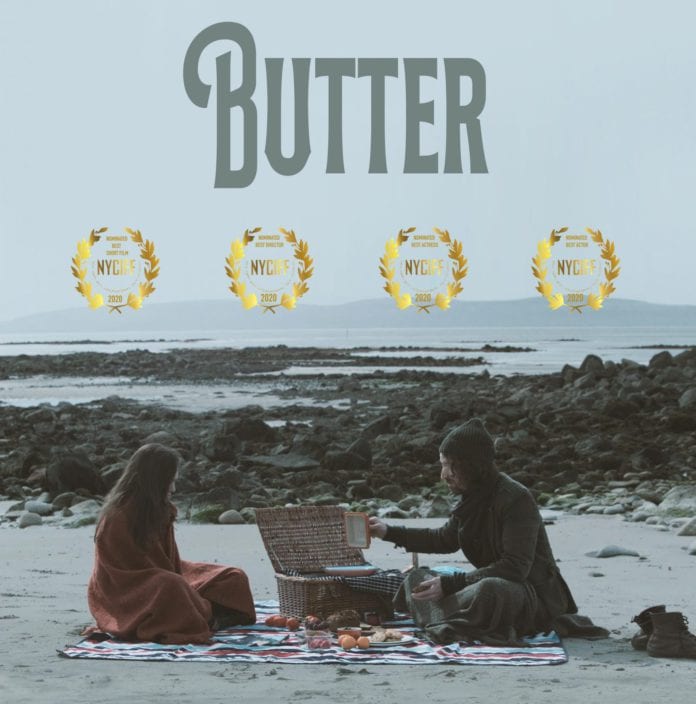 Butter, a short film by writer/director Emma Brennan shot in Galway has been selected to screen at Marché Du Film at the prestigious Cannes Film Festival.

This romantic comedy about an Irish couple and their love of butter has also been selected to screen at New York City International Film Festival.

This is the 2nd short of Emma Brennan whose debut short ‘Hello Brother’ won “Best Super Short” at New York City International Film Festival 2019, after its world premiere at Galway Film Fleadh the year before.

Speaking about the double nomination, Emma Butler said they were all thrilled with the news, calling it a great honour to be nominated.

“I’m so proud of Orlaith and Conor and their nominations for Best Actress and Best Actor.  They were a dream to work with – such chemistry and readiness. I’m delighted for them.”

“To have Butter nominated for Best Short Film and Best Director is a credit to the amazing work and dedication of our committed Butter team – Rob, Niall, Orlaith and Conor – and the collaborative input of creative talent and technical expertise combined.”

As well as directing, Emma tutors actors in the Michael Chekhov Method in Dublin and is the founder of The Actor Lab.

Orlaith Ní Chearra, whose family hail from Oranmore and Ballinasloe, is a well known performer in Galway working with An Taibhdhearc, Fíbín, Ros na Rún, The Galway Theatre Festival and The Galway International Arts Festival.

She trained at London Studio Centre on a Leverhulme Scholarship graduating in 2016 and toured Europe as an Actor-Musician before returning to Galway.

Conor Graham is an actor and musician graduating from the National University of Ireland, Galway with an MA in Drama Studies. He teaches voice for drama in Galway.