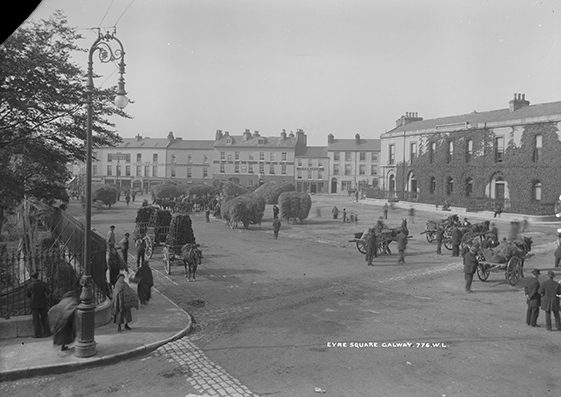 Galway City Council has confirmed a number of events planned for the Decade of Centenaries celebrations which will take place this year.

The council was awarded €50,000 in January to put on community led events this year, the finale of the decade the commemorates the most significant period in Irish history.

The Decade of Centenaries programme was launched in 2012, to highlight the economic and social conditions of the period, the shifts in cultural norms, and the experience of the Irish abroad, as well as the massive events that ended in Irish Independence.

It encompasses the different traditions on the island of Ireland and the initiative provides opportunities to focus on the everyday experience of ordinary people living in extraordinary times, as well as on the leaders and key actors in these events.

It also aims to offer fresh insights and constructive dialogue, and to foster deeper mutual understanding among people from the different traditions.

The Decade of Centenaries further provides an opportunity to focus on the development of access to historical records and primary sources from the time period, and for working with local and national cultural bodies to bring forward a diversity of exhibitions and public discussions.

Following the funding announcement in January, Galway City Council put out an open call for project proposals, the following of which have been confirmed.

The finalised dates and times of the coming events will be announced by the council in due course.

1922: Nora Barnacle and James Joyce – The Galway Story. An evening of readings, conversation and music highlighting Nora Barnacle, her life in Galway and her role in the Joyce odyssey.

Participants include Nuala O Connor, author of Nora: A Love Story of Nora Barnacle and James Joyce, and Ray Burke the author of Joyce County, a book which is being re-issued in 2022 with illustrations by Joe Boske.

Nora-themed music by the Mannions and Emily Greaney, from the 1921 project, will enhance the evening’s celebration. In addition to this various book clubs events will be hosted both online and in-person during April in our city Libraries.

1922: A Dialogue through Poetry and Music will be a collaboration between 3 Poets and Musicians commissioned to create new poetry and musical works on the theme of 1922.

These Poets and Composers/Musicians, representing the various districts in Galway City will collaborate and participate in this innovative project to create new poetry and musical work with emphasis on a cultural and social Ireland of the period…Sport, Creative Thinkers, Art, Fashion, Entertainment, Communication and Emigration.

The combination of words and music is aimed to lead us past the hard politics of the era to reflect more on a social, cultural and creative Ireland and, in doing so, combine the past with the present and the local with the national.

The Irish Civil War: The Galway Centenary Conference – Through a diverse range of topics with music and prose an environment will be created for reflection providing a more sympatric understanding of all those who took part in the event regardless of whichever side people took.

The programme also examines, one hundred years on from the Civil War, what are the lessons of the past and how we can avoid repeating them in the future.

Ó Máille & Mellows exhibition – Galway City Museum is planning to curate a temporary exhibition that examines the tragedy of the Irish Civil War through the personalities of Pádraic Ó Máille and Liam Mellows, whose lives and fates were intertwined.

More broadly, the exhibition will look at the Irish Civil War, with particular focus on key events in Galway, city and county.

It will be supported by an event(s) that explores the lives of Ó Máille and Mellows and their fervent and sincere beliefs in their stances regarding the Anglo-Irish Treaty in order to better understand both perspectives.

It will also show the changing roles of An Garda Síochána over the past 100 years. It is envisaged that a temporary exhibition will be on display at Galway City Museum in May and June 2022, and that a touring version of the exhibition will travel the county in the second half of the year.

Galway Snapshots 1922 – Galway Snapshots will present everyday scenes from life in the city in 1922. Taking reference from contemporary photographs, the project will re-create iconic heritage images of Galway.

The technique and methods for making the environments/images will be informed by the local film industry where the “Sets” will be propped and dressed to look exactly as they might have been at the time.

Using heritage buildings and streetscapes that still exist an authentic live picture of that space in 1922 will be made real. The Snapshot project will provide Artist led ideas with unique images for worldwide dissemination of social and worldwide media.

This will be developed as a lament for the Civil War dead and four poets are to be invited to respond on the theme of commemorating all those from Galway City who died during the Civil War.

A YouTube video/short film and a booklet will be produced which will provide a permanent record of the creative process. The music would be performed in the Town Hall or City Hall in December 2022.

Galway gets €100,000 for community led Decade of Centenaries events

Let the eye wander at Misleór Festival of Nomadic Cultures