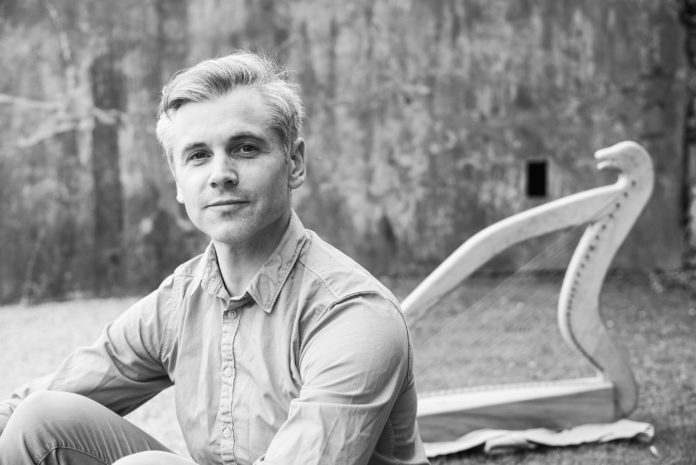 Lúthchleasa is an exhibition of new generative artwork by Mícheál Ó Catháin, showcasing his process of engaging with the early Irish harp tradition.

For over a decade Mícheál has been discovering the shapes and sounds offered to human touch by the metal and wood of the harp, and the lúthchleasa patterns encoded in the notes penned by a young Edward Bunting at the 1792 Belfast Harp Meeting.

The exhibition runs until December 22 in Galway Arts Centre, Gallery 1, culminating with a solo concert on harp, voice and electronics by Mícheál on Saturday 18 December at Galway Arts Centre’s Nuns Island Theatre. Tickets are available via eventbrite.

Much of his work explores the international state, and the mechanics that support and underpin it. Focusing on the European Union as a centralised power, and Ireland’s role within it, his practice reflects on the classification of groups through the lens of geography.

Ohtsubo has had numerous exhibitions of her work in Japan and overseas, however this will be first exhibition in Europe. Ohtsubo’s work has been inspired by the poetry of Nuala Ní Dhomhnaill.

By engaging with Ní Dhomhnaill’s ‘Immram’ sequence and her poem ‘Dubh’ through the Japanese translations of Mitsuko Ohno, Ohtsubo has responded to the themes of the texts in very personal and powerful ways.

The exhibition will feature Ohtsubo’s installation ‘Black Milk’ along with other works that demonstrate her compassionate grasp of Ní Dhomhnaill’s poetic world and reflect underlying themes of migration and displacement.

Ohtsubo’s exhibition at Galway Arts Centre is hosted by the Republic of Conscience: Human Rights and Modern Irish Poetry and the NUI Galway Research Project.

Each artist in Galway Arts Centre’s December programme has developed a unique engagement with research, translation and the complex visualization of systems of music, exchange and language through sonic work, immersive installation, video and performance.