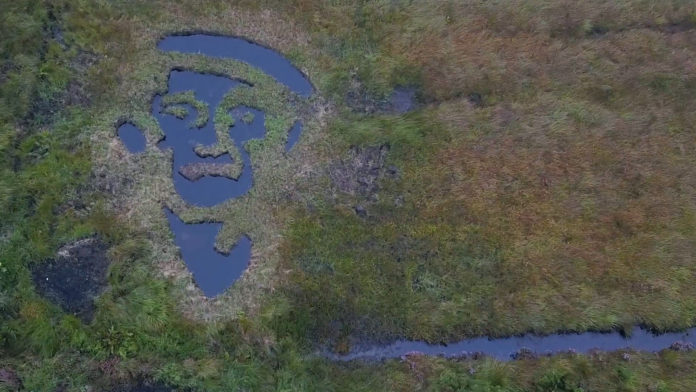 The film ‘Portráidí Criathraigh’ (Bog Portraits) will premiere online on Monday 1 March as part of Galway 2020 European Capital of Culture.

Directed by Ríonach Ní Néill and Joe Lee, the film follows the making of Portráidí Criathraigh, a landscape installation artwork located in the bog at Ros Muc in Connemara by visual artist Seán Ó Flaithearta in 2019 and 2020.

Ríonach and Joe are award-winning film directors and have won awards for their filmmaking at festivals in Spain, the Netherlands and Ireland.

The artwork was commissioned by Ríonach Ní Néill as part of a series of installations looking at the interplay between Gaeltacht culture, weather and landscape.

Seán and Ríonach collaborated with the local community in Ros Muc to find suitable sites in the bog to create the portraits and to choose two local people, the sean-nós dancer Cóilín Sheáin Dharach Seoige and Bridget Aylward, Queen of Alaska to be honoured in the installation.

“It is quiet and still now, but until recently this bog would have been noisy with chat and laughter as people of all ages gathered to bring in the turf.

“The film captures a relationship on the cusp – no longer our source of fuel, what will the bogs mean to us in the future.”

The Portraits of Bridget Aylward and Cóilín Sheáin Dharach Seoige which have been beautifully cut into the bog by Seán Ó Flaithearta are clearly visible and look different each day depending on whether the weather is wet or dry.

Marilyn Gaughan Reddan, Head of Programme at Galway 2020 added: “This is such an important project, as always Ríonach Ní Néill has managed to capture the essence of a true European capital of culture project, in the celebration of place, people and participation

“We are really honoured to have these incredible projects in our programme and know that this work is captured for future generations to come is such an important legacy.”

Bridget Aylward was born Bríd Ní Mhainnín in 1865 Ros Muc. She emigrated to America as a maid and made her way to the Yukon where she made her fortune in gold mining and earned the moniker Queen of Alaska.

In her old age she returned to Ros Muc, which was still blighted by poverty, and left her fortune in a foundation for the education of local children. Though she died in 1958, her foundation is still giving educational opportunities, three generations on.

Cóilín Sheáin Dharach Seoige didn’t take up dancing until his 50s, and it was in his 60s and 70s that he gained recognition as one of the finest exponents of the Connemara style of sean-nós dancing.

The art-form was dying out in the 1980s, but Cóilín is credited for inspiring a new generation of dancers to emulate him and sean-nós is now danced across the globe.

The Portráidí Criathraigh film will premiere on 1 March, with two live online screenings at 6.30pm and 7.30pm only.

The 6.30pm screening will be followed by a Q and A in English and in Irish with Directors Ríonach Ní Néill and Joe Lee and Artist Seán Ó Flaithearta.

The 7.30pm screening will be hosted by Oifigigh Pleanála Teanga na Gaillimhe followed by an Q and A in Irish with the artist and directors.

To register for the online screening visit www.turaschonamara.ie