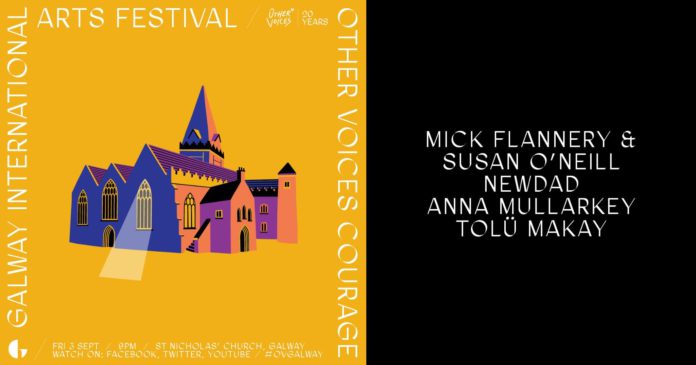 A one-off livestreamed concert featuring some of Ireland’s most talented artists will take place from St. Nicholas’ Church in Galway City as part of Galway International Arts Festival (GIAF).

GIAF has joined forces with iconic music television show Other Voices to broadcast the  event online on September 3.

The spectacular duo of gifted multi-instrumentalist Susan O’Neill and renowned Irish songwriter Mick Flannery will also perform a special set together ahead of their duets album released in September.

Taking place at 9pm on Friday 3 September, Other Voices and Galway International Arts Festival will collapse distance between homes around the world and the front row of the iconic St Nicholas’ Church with an inspiring evening of performances all free to enjoy online.

Philip King, founder of Other Voices, said that they were delighted to receive the invitation to be part of Galway International Arts Festival.

“Galway has always cherished and celebrated a diversity of musical voices and Other Voices is very pleased in this our 20th year to put together a programme that is in tune with the ethos of the festival and to share stunning performances from St Nicholas’ Church in the heart of Galway with the world,” he said.

“It has always been such a great platform for new Irish music and we are delighted to be involved in helping celebrate its 20th birthday,” said John Crumlish.

The organisers hope that the incredible musical offering will bring Irish and international fans together to celebrate the dazzling talent exploding from Ireland, with half of the line up from Galway.

Fans can stream the weekend’s performances for free on  Other Voices’ and GIAF social media platforms.

Inis Oírr gears up for exciting exhibition of 21 currachs

Briain Kelly - July 24, 2021 0
A Galway man pleaded guilty to dangerous driving causing the death of a passenger in the allegedly stolen car he was driving last August.Richard...