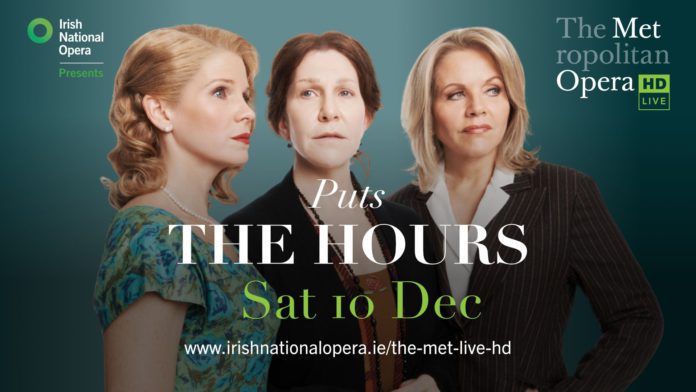 The live world premiere of Kevin Puts’s The Hours will be shown at three cinemas in Galway next weekend.

The highly anticipated opera will be shown live at Eye Cinema Galway, Omniplex Salthill and Pálás Galway at 5.55pm on Saturday, 10 December.

Irish National Opera partnered with The Metropolitan Opera to present the world premiere of The Hours, which follows three women from different eras who each grapple with their inner demons and their roles in society.

The story is adapted from Michael Cunningham’s acclaimed novel The Hours, inspired by Virginia Woolf’s Mrs Dalloway, and made a household name by the 2002 Oscar-winning film starring Meryl Streep, Julianne Moore and Nicole Kidman.

Renée Fleming, one of the most beloved and celebrated artists of our time, returns to the Met stage for the first time since 2017.

Joining her is Joyce DiDonato, renowned mezzo-soprano who has been nominated for ten Grammy Awards, and Kelli O’Hara, Tony Award–winning Broadway actress who returns for her third Met production.

Met Music Director and acclaimed maestro Yannick Nézet-Séguin conducts, and film actress Christine Baranski, known for her work in The Good Wife, The Good Fight and The Gilded Age hosts the transmission.

Don’t miss the world premiere of Kevin Puts’s The Hours, which is surely one of the best things to do in Galway this weekend.