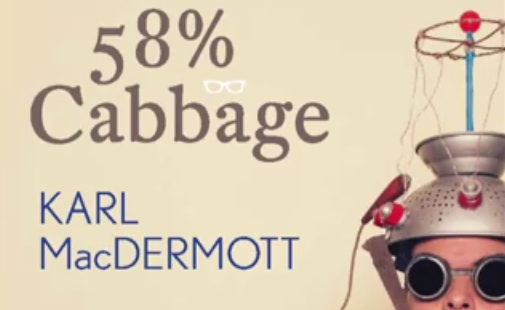 58% Cabbage, a novel set in Galway about a middle-aged man who decides to try stand-up comedy, is due for release in September and is being published by London publisher the Black Spring Press Group.

The novel chronicles the hapless adventures of 43-year-old Roddy Bodkin as he grapples with a sense of loss – and a loss of sense – while attempting to pursue his comedy dreams.

Roddy Bodkin recently lost his job and his long-term girlfriend is tiring of him, and he begins to feel that he is getting old, that life is passing him by.

Former stand-up comedian Karl MacDermott was once described as ‘the Gummo Marx of Irish comedy’ and has written for television and radio in both Ireland and the UK.

He is the author of two books of comic fiction. Find out more about him at www.karlmacdermott.com