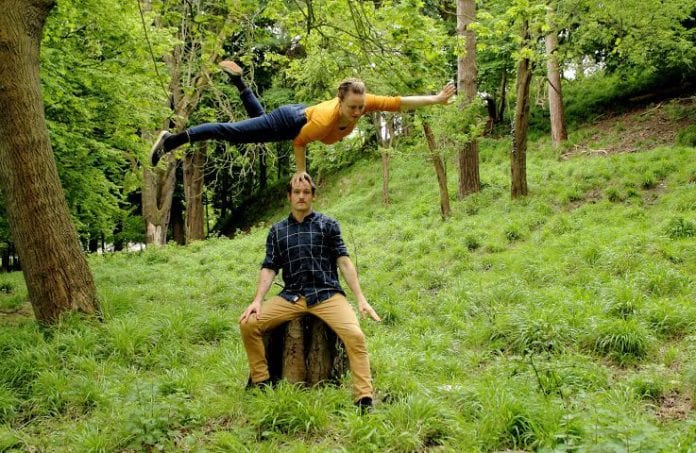 There has been a massive response from all across Ireland to a recent call for street artists and performers to take time out on Inis Oirr, in partnership with the local arts centre.

The Irish Street Arts, Circus and Spectacle Network (ISACS) were taken aback by the huge interest among performers in the chance to enjoy a month-long residency on the smallest of the Aran Islands in association with Aras Eanna Ionad Ealaiona.

An acrobatic hand to hand performance company, Cikada Circus, were selected for the first month long residency on the island this month.

Led by Henrik Gard, originally from Sweden, and Ali Stanger, from the UK, they organised Ireland’s first acrobatic convention, Irish Acro, and normally divide their time between Dublin and Belfast.

“We’d like to use the Island’s landscape as a springboard for acrobatics; jumping off ledges, running up walls, etc. We have an idea of creating either a show or a walkabout that is entirely site specific where we only use the surroundings to create and complete our acrobatic tricks,” said Henrik.

This residency was due to take place this October, but had to be postponed due to the recent coronavirus restrictions and will be rescheduled at a later date.

“For me, Inis Oírr is a place that frees your mind and lets you look at your life,” said Lucy Medlycott of ISACS.

“I just love it out there. Being on Inis Oirr really grounds you. It’s very grounding and very good for releasing stress and getting back to the essential thing of just being.

“There was so much interest in this residency. We are in a place where somebody has pressed pause. This is the time to go and do creative thinking.

“It’s an absolute God-send to be given a place like that and a break from the daily grind.”

Lucy said it was fantastic that both Aras Eanna and ISACS were in a position to offer artists funding to take time out for a month on Inis Oírr, at a time when many artists are struggling.

She said the peaceful island, rich in our native language and culture, inspired creativity. Lucy hopes Cikada Circus will be in a position to take up the residency when the current restrictions end.