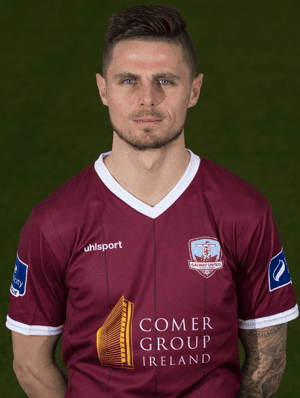 One year on from joining the Tribesmen, Galway United midfielder Gavan Holohan has signed for newly promoted Waterford FC.

The south east club announced on their website this morning (www.waterfordfc.ie) that they had captured the 26-year-old midfielder who was linked with moves cross channel.

HOLOHAN SIGNS: We are delighted to confirm the addition of Gavan Holohan ahead of the 2018 SSE Airtricity League Premier Division season.

Holohan was a key performer in Galway United’s quest to avoid relegation last year appearing 33 times and scoring seven goals including a hat-trick against Drogheda United in Eamonn Deacy Park.

The former Hull City youth team captain links up again with manager Alan Matthews who he also played under during his time with Cork City.  In December 2016, Holohan left Cork City to link up with Shane Keegan at Galway United.

“There were a few things that attracted me to Waterford,” said the Kilkenny native who also had a spell with Drogheda United in the Airtricity League.  “I worked with Alan Reynolds at Cork and always got on really well with him. I liked how he went about things so I felt he was someone I’d like to work with again; someone who could get the best out of me.

“Obviously the club is heading in the right direction with the quality of players signed already and also with its fan base growing and growing again. The set up and facilities are second to none down here, so it’s a great environment in which to play football. Being a Kilkenny man, it’s only down the road for family and friends to come to see the home games, which is a big bonus for me.”

“I’m looking forward to meeting and performing in front of the Blues’ fans. I’d see myself as a creative attack minded midfielder who will be hoping to chip in with a lot of assists and goals. Most important however, I plan to work hard for the team and the rest should fall into place after that.

“We have to get off to a good start first of all and that will dictate what kind of season we have, so if we can do that it’s about getting as high up the table as possible and pushing for a European place.”