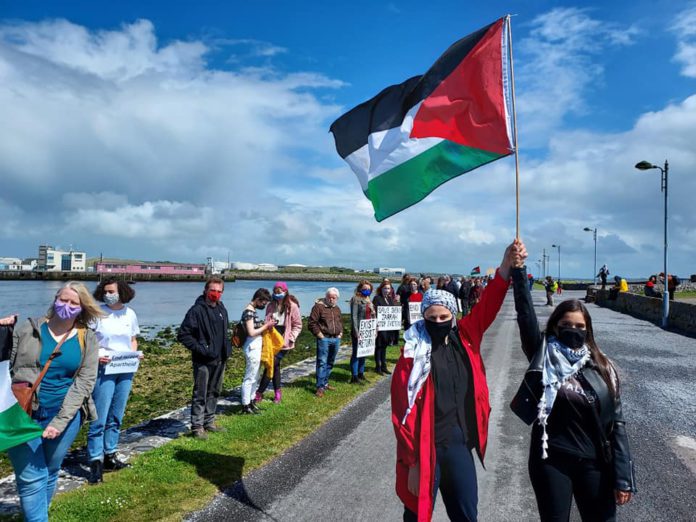 A vigil in support of the people of Palestine will take place this Saturday, New Year’s Eve, at 2pm in Galway city.

The vigil at the Spanish Arch is one of ten taking place across Ireland to commemorate the 14th anniversary of the Gaza War, which killed over 1,000 Palestinians.

The annual gathering will also highlight the ongoing occupation of the West Bank and East Jerusalem.

2022 has been the deadliest year for Palestinians being murdered by Israeli soldiers or illegal settlers in the West Bank since the UN started recording fatalities in 2005.

Ciaran Tierney, a spokesperson for the organisers, said: “Obviously, the war in Ukraine has been horrific this year. But this annual vigil in Galway is to remind people that the West Bank and East Jerusalem have been illegally occupied for 55 years and that the people of Gaza have been living under an inhumane siege for 15 years.”

Mr Tierney said that children and teenagers have been shot by soldiers who face no punishment for their crimes.

He also highlighted the murder of journalist Shireen Abu Akleh in the Jenin refugee camp in May, which he said showed that soldiers enforcing an illegal occupation carry out illegal executions knowing they won’t be punished for their crimes.

“The horrific attack on Shireen’s funeral in Jerusalem showed the contempt which the Israeli authorities have for the brave reporters who report the truth about the occupation on the ground,” said Mr Tierney.

“Even in death, Shireen was seen as a threat by the occupiers. Shireen, a Christian who was also a US citizen, was a hero to the people of Palestine for her brave reportage for 25 years and the illegal occupiers did not want her funeral to turn into a mass demonstration.”

Galway has been home to Palestinian post-graduate students over the past three to four years and members of a dance group from the Aida refugee camp in the West Bank cried when they visited the ocean for the first time during a trip to Galway and Connemara in September.

They received a standing ovation for a show celebrating Palestinian culture at the Town Hall Theatre during their visit to the city.

“All are welcome to the vigil at the Spanish Arch,” added Ciaran Tierney.

“It’s a chance to meet up, fly a flag, and to show that Irish people have not forgotten the people of Palestine at the end of what has been a horrific year for them.”