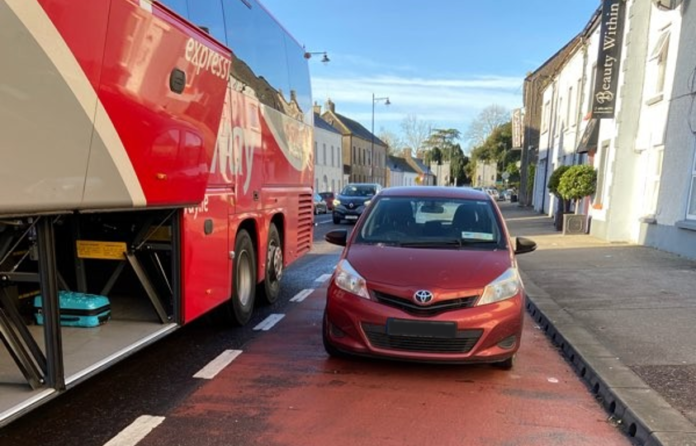 Bus Éireann says that bus stops are blocked by parked cars, delivery vehicles and other obstacles every day which is not only inconvenient but can also be a serious safety concern.

Blocking bus stops can force buses to stop in traffic causing congestion and in some cases prevents people who use wheelchairs from accessing or disembarking from public transport.

Bus Éireann wants to make it clear that parking in a bus stop is never acceptable as it can cause inconvenience and frustration for all passengers, and particularly people who use wheelchairs or who have limited mobility.

“We want to ensure that all our passengers have a safe and comfortable journey which begins and ends at safe, unobstructed bus stops,” said Bus Éireann CEO Stephen Kent.

“We operate in towns and villages across Ireland and I am appealing to people this week – as you go about your preparations for Christmas, please be mindful of designated bus stops and do not park or stop temporarily in them.”

“Passengers who rely on our services, particularly people who use wheelchairs, need to be safe and comfortable boarding and alighting from our vehicles. It may be tempting to think ‘I’ll just be a minute’ but your five minute stop has a serious impact on many other people.”

Mr Kent said that the evenings are dark at the moment and traffic in the lead up to Christmas will be busier than usual in towns and cities which makes safe bus stops even more important.

“So this week – I am asking people, if you see a bus stop and consider pulling into it, think again,” he said.

“Think of the potential difficulties you may cause with traffic congestion and the implications for vulnerable transport users.”

“We must all be more thoughtful and considerate of those using public transport services and on bus stops our message is simple: Keep it Clear.”