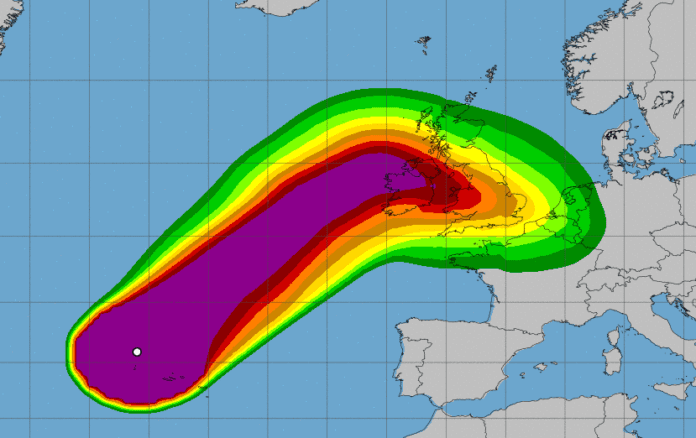 Met Eireann has issued a Status Orange Weather Warning for storm force winds in Galway and five other counties ahead of Storm Lorenzo.

More yellow weather warning for heavy rainfall have been issued for the entirety of Ireland as Storm Lorenzo is expected to bring flooding and storm surges on Thursday night.

The Orange wind warning issued by Met Eireann covers Galway, Mayo, Clare, Cork, Kerry and Limerick and will be in effect from 6pm on Thursday evening to 3am on Friday morning.

It warns that “Southwesterly winds veering westerly will reach mean speeds 65 to 80km/hr with gusts generally of 100 to 130km/h, higher in coastal regions.”

People in Galway, particularly those living in coastal areas, are advised that storm surges are expected which will cause coastal flooding and damage.

A Status Yellow wind warning has also been issued for all of Ireland forecasting of wind speeds of 50-65km/hr and gusts reaching 100km/hr.

This covers all counties including Galway. It comes into effect before the Orange alert at 9am on Thursday, and will remain in place afterwards until 6am on Friday.

Intense rainfall is also expected throughout Thursday across the country, with a status yellow weather warning predicting in excess of 50mm in the west and northwest.

This rainfall warning comes into effect at 9am tomorrow and will remain in place until 9am on Friday.

A spokesperson for Met Eireannsaid that “The effects of Storm Lorenzo will begin to be felt across Ireland from midday Thursday, peaking late Thursday evening and Thursday night, easing Friday morning.”

The National Emergency Coordination Group are meeting at 10:30am today to discuss the latest update from the Met Eireann and discuss what actions might need to be taken.

The government has said that decisions on whether or not to close schools will be made locally.

Storm Lorenzo is tracking to be the strongest to hit Ireland since Storm Ophelia which shut down the country for almost two days in 2017, blocked roads with uprooted trees, and left 300,000 without power at its worst.