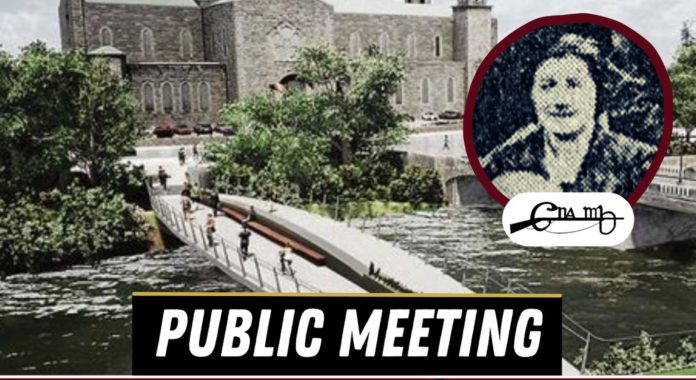 A public meeting will be held in Galway city to push for the new pedestrian bridge over the Corrib to be named after Cumann na mBan volunteer Julia Morrissey.

The meeting, hosted by Éirígí For a New Republic, will take place in Áras na nGael on Dominick Street on Monday 28 March at 8pm.

The campaign includes an online petition for the bridge to be named after the 1916 Cumann na mBan hero, which has so far gathered over 300 signatures.
Éirígí’s Galway representative, Ian Ó Dálaigh, will chair the meeting, and it will be addressed by guest speaker, Jamie Canavan.
Canavan is a PhD student at NUI Galway, whose thesis focuses on foster care in 20th century Ireland. Her research is sponsored by the Irish Research Council.
Ian Ó Dálaigh said that Morrissey was a Cumann na mBan commander during the Easter Rising in Galway – but she has been largely forgotten by history since then.
“The same can be said of many Cumann na mBan members,” he said. “Many of those women stayed true to the radical republican ideal envisioned in both the 1916 Proclamation and the 1919 Democratic Programme.
“These documents clearly expressed the republican vision of an Ireland built on the principles of liberty and equality – where all citizens would be treated as equals regardless of their gender, religion, ethnicity or any other false division.”
Ó Dálaigh noted that the membership of Cumann na mBan voted overwhelmingly to reject the Treaty, and that the handing of power to the capitalist class, big farmers, and the churches set back the cause of women’s rights by decades.
“So it’s no surprise that Julia Morrissey and many of her comrades have been effectively written out of history,” he said.
“The Ireland that grew out of the victory of counter-revolutionary forces was a place that was incredibly hostile to women’s rights.”
Jamie Canavan will give an overview of how the 26 counties treated women and how the movement for women’s rights has advanced over the last few decades.
Ó Dálaigh encouraged anyone who can attend to do so, as it’s “vitally important that we have these discussions in order to inform the building of a movement that will tackle – and end – all inequalities in Irish society today.”