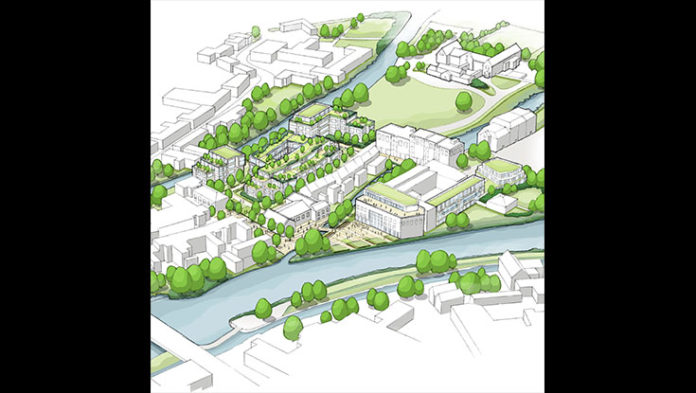 The announcement earlier this week of more than €50 million worth of funding to invest in major infrastructure projects in Galway City has been enthusiastically welcomed.

Minister for Housing, Local Government and Heritage, Darragh O’Brien announced on Friday that €62.5 million in funding was being provided for infrastructure developments in Galway.

All of these infrastructure projects are being undertaken by Galway City Council, and the last one is a collaboration between the council and NUI Galway.

Cllr. Mike Cubbard, Mayor of the City of Galway said that he was delighted to welcome the funding announcement for these “ambitious” infrastructure projects.

“They will transform our medieval city into a modern centre of innovation and sustainability. We must now knuckle down to deliver for the city and its people.”

The €40.3 million Galway City Council Transport Connectivity Project focuses on the redevelopment of Ceannt Station, a pedestrian and cycling bridge across the Corrib on the old Clifden Railway Line abutments, and other connection works.

The Public Spaces and Streets Project consists of public realm improvements to six different areas of the city, for which €8.64 million has been allocated.

And lastly, €4.3 million has been awarded for the Galway Innovation and Creativity District project. This will be a major redevelopment of Nuns Island and Earls Island undertaken by the city council and NUIG to create new spaces for science and innovation, along with arts and culture.

Professor Ciarán Ó hÓgartaigh, President of NUIG said the university is “committed to the public good and this development very much speaks to this ethos and to our core values of Openness, Respect, Sustainability and Excellence.”

“With these values as our guide, the plan for Nuns’ Island which this funding supports will continue to be developed following consultation with our local community.”

The City Council submitted its applications for these infrastructure projects to the Urban Regeneration and Development Fund last May, following intense preparation work earlier in 2020, much of it taking place during the first lockdown.

Workshops were held with external stakeholders, and input from public submissions incorporated, to help prepare the presentation made to the independent Project Board adjudicating applications from around the country.

Brendan McGrath, Chief Executive of Galway City Council in welcoming the announcement said, “I am very grateful to the fantastic team of people who collaborated and worked in such a committed way on these projects.”

“I am very proud of what has been and will be achieved for Galway. This is a fantastic outcome for Galway City Council and the City and these schemes will be truly transformative for this City and the Region.”