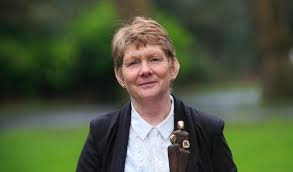 Local historian Catherine Corless was among those honoured at the 43rd Rehab People of the Year awards yesterday.

Catherine Corless received her award for her work bringing to light the horrific story of nearly 800 children buried at the former Bon Secours Mother and Baby Home in Tuam.

Speaking at the ceremony Ms. Corless called for the remains of the children buried at the Tuam Home to be excavated and properly interred.

“We have a long way to go yet. To get answers to Tuam and why this happened and to make sure that those children in that graveyard, to make sure they’re taken out of there and put where they should be, in a Christian graveyard.”

She said that there would be “no rest” until the survivors of the Tuam Home receive an apology from the Catholic Church and the State, insisting that it is “the least that they deserve.”

In a video played at the awards chairperson of the Tuam Home Survivors Network Peter Mulryan praised Catherine Corless for how her work has helped survivors of the Tuam Home.

“We can hold our heads up high now, we are recognised in society at last and it’s about time. We were in the doldrums in the dark old days and I’m delighted that she’s getting this award.”

Others who were recognised on Sunday include the Irish Coast Guard, the crew of Rescue 116, and Fr. Peter McVerry who was receiving his second award for his work with the homeless.

The 43rd annual Rehab People of the Year Awards ceremony took place on Sunday at the Mansion House in Dublin.