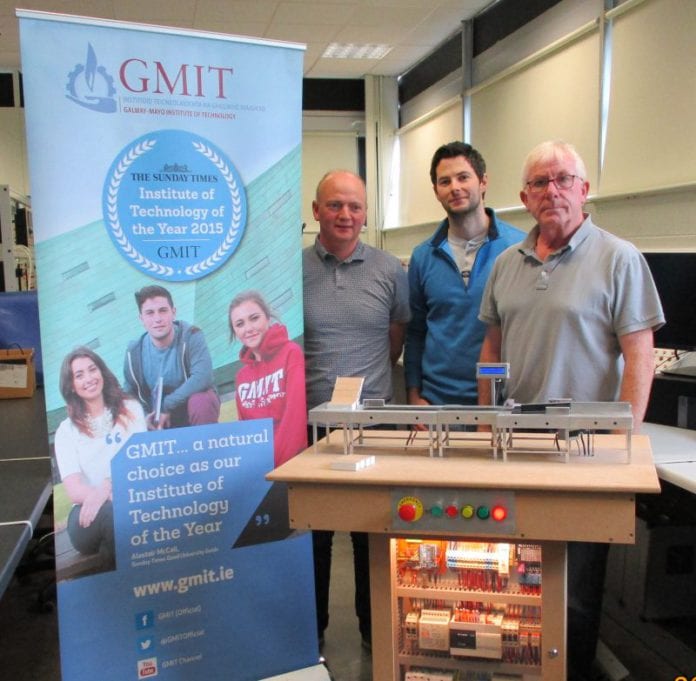 Paul is a Third Year student in GMIT’s Bachelor of Engineering in Electrical Services & Automation Engineering.

He’s been shortlisted for this national engineering prize for his final year project, a  ‘Check Weigher Conveyor System’.

The system automatically loads product, weighs it and sorts it based on its weight, a creation that is broadly applicable across many areas of industry.

“Automation was a very prominent theme throughout my degree programme and I knew from the outset that I wanted to base my final year project around it,” said Paul.

As to why he decided to go with this project in particular:

“I can’t say that I have a solid reason for choosing a check weigher conveyor system,” Paul said.

“Only that I wanted to take something I knew very little about and understand it as best I could.”

The Portumna man thanked his lecturers and supervisor, Paul Ryan, who advised and supported him through his work.

MIDAS Ireland is an industry led group of academics, professionals, and government agencies that works together to assist in the development of electronic engineering in Ireland.

Entries for these awards were judged based on their Technical quality, Originality, Abstract, Background and Motivation, Conclusions Drawn, Supporting References Used, Presentation Impact and Quality.

Paul is one of only three finalists selected from across Ireland colleges.

The other two students nominated are Anthony Wall from UCC and Yugian Dai from IT Carlow.

The winner will be announced later this month on October 18 at IT Carlow.

The winner will be invited to the 2018 MIDAS Ireland Conference & Gala Dinner, which is being held on November 8 in the Ambassador Hotel, Cork.