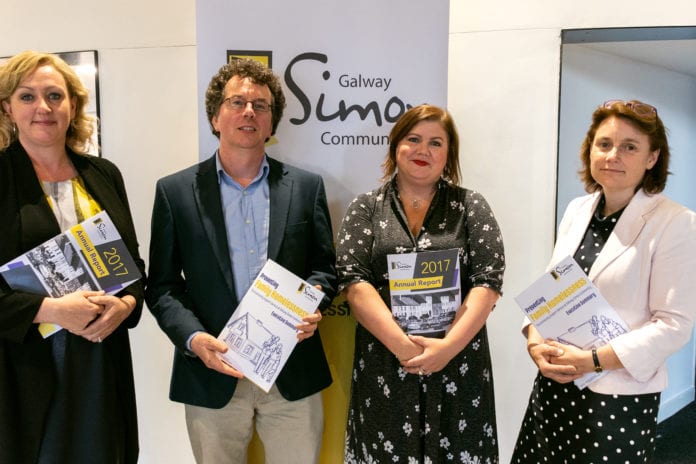 The Galway Simon Community kept 281 children from 113 families from becoming homeless last year as demand for their services is climbing higher than ever.

Galway Simon released its annual report for 2017 this week, and warned that the homelessness crisis is going to get worse before it gets better.

The number of people coming to them for help is higher than it has ever been in the 40 years their doors have been open.

Newly appointed CEO of Galway Simon Karen Golden said the increase was staggering “Five years ago in Galway we had about 36 people in Emergency services,”

“And in July – August this year we nearly 500, so it’s an absolutely massive increase over last five years.”

That number is just the tip of the iceberg, she said, and doesn’t take into account all of the hidden homeless in Galway.

People who are sleeping on friends couches, moving around without the aid of emergency services, or are living in stress because they are being evicted.

Going forward, the Galway Simon Community expects that the homelessness crisis will continue to deteriorate in Galway before things improve.

That’s why they’re going to continue to focus on preventative measures. Last year Galway Simon supported 537 unique households, and 402 of those were about keeping people from becoming homeless.

“It is our belief that early intervention is the key to keeping people out of the emergency accommodation and ultimately, out of homelessness,” said Karen.

“If we can prevent more people from becoming homeless in the first place, we can in turn reduce the trauma and economic cost associated with homelessness.”

The latest figures available for Galway show that in 2016 there were over 5,000 people on a waiting list for social housing in according to Galway Simon.

The number of new social housing units being created, in the city in particular, is simply not sufficient, the homelessness charity said.

The government set a target for all of Galway of 931 new housing units in 2018, with 73% of those to come from the private rental sector.

But according to figures from the Department of Housing, 93% of new housing that became available in Galway this year was private housing.

“With rent increases in the city of 16% in the last year, this is not sustainable,” Karen said, “We really need to concentrate on adding to the social housing stock.”

“In the short term we could regulate the rent pressure zone to try and enforce the cap. If we have a cap of four percent, it’s meaningless if we have rent increases of 16 percent.”

Karen also said AirBnB needs to be regulated to make more homes available for families to rent, rather than going to tourists for short term lets.

According to her, 3,300 properties in Galway were listed on AirBnB in August, while last week there were only 146 rental properties on Daft.ie across all of Galway.

“Those number are completely skewed. We have tourists staying what could be family homes, and families staying in hotels and B&B’s.”

Joan Reinhart, manager of Galway Simon’s Youth, Family and Women’s Services presented some heartbreaking examples of the conditions that people have found themselves living in.

In one instance, an elderly couple had all of their children and grandchildren move back in with them because they lost their homes.

15 people living in one three-bedroom house. This puts serious stress on the relationships of families, she said, and leaves children with no space to be children.

In another case, a family was forced to come to Galway Simon for help for the third time in as many years because their landlord was evicting them to sell their home.

She warned that the longer people remain trapped in emergency accommodation, or at risk of homelessness, the greater the impact on their health and well being.