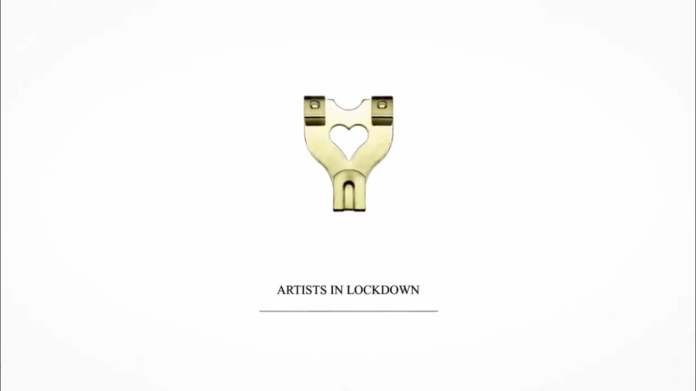 When the world was plunged into lockdown due to the pandemic, life suddenly became a lot quieter for Fionn Crombie Angus and his dad, Jonathan Angus.

The globe-trotting duo, who together form social enterprise Fionnathan Productions, was forced to cancel their travel plans, including a scheduled address to the United Nations in Geneva.

Instead they dedicated themselves to their art, and appeared in a new film that portrays how artists with Down syndrome have coped with life during lockdown.

Produced by Heart & Sold, a global arts organisation that has represented, promoted and supported visual artists with Down syndrome, Artists in Lockdown explores the life and work of fifteen different visual artists from six countries.

During the film, Fionn who is a gifted visual artist, can be seen showing off one of his other many talents as he plays his fiddle, while Jonathan accompanies him on the guitar.

The minute-long segment sees the pair play Battle Cry of Munster, and was filmed in Wood Park near Fionn’s childhood home in East Clare.

“The film was driven by our desire to document this moment in history and offer a glimpse into the worlds of our artists and how it was affecting their work and their lives,” said Chris Kenward, who directed the film.

“As the pandemic unfolded, we began to see how our artists were using their art and creativity to cope with what was going on in the outside world and we have loved seeing the beauty that has been created in these trying times.”

For Chris, the footage of Fionn and Jonathan was among his favourite moments of the film.

“The closeness of their father-son bond is just beautiful to watch; and it was so lovely to see another side to the pair; over the years, I have seen their paintings and line drawings at the Heart & Sold exhibitions, but hadn’t witnessed their considerable musical abilities before.

“I also loved how the piece creates a real sense of calm and think it underlines perfectly how art and music are such important means of distracting ourselves from the stresses of the current situation.”

Fionn enjoyed spending time at home during the lockdown and loved filming their part for the Artists in Lockdown film, but he now misses travelling.

“Although we have been able to take part in conferences, festivals and exhibitions online, it’s not the same as being out on the road or going in to schools and meeting new people,” said Fionn.

“I am looking forward to things settling into a ‘new normal’ and being able to pull my usual large audiences when I’m busking in Galway – I have been playing in my usual Shop Street spots, but the city is quieter than I would like at the moment!”

Jonathan added that the lockdown was brought in just as they should have been heading off to Geneva for Fionn to address the United Nations as part of the World Down Syndrome Day celebrations.

“To say we were disappointed would be an understatement, but – as with many of our cancelled engagements – we were able to make a contribution digitally,” he said.

“While we have been frustrated by the necessary travel restrictions, lockdown has given us the opportunity to just be.

“Fionn and I strive to be at one with nature in our usual lives, but being at home for such an extended period has allowed us more time to explore and, as we’ve recently moved closer to the ocean, we’ve also added frequent swims and nature watching to our routines.

“It has also allowed us some real quality time to spend on our art and music, with the creative process providing a welcome counterpoint to the anxieties that I think many of us are experiencing.”

Heart & Sold was founded in 2012 and for eight years has represented more than 20 artists with Down syndrome around the globe, advocating for their right to be included in the art world.

To find out more about Fionn and Jonathan and their work, visit www.fionnathan.com.