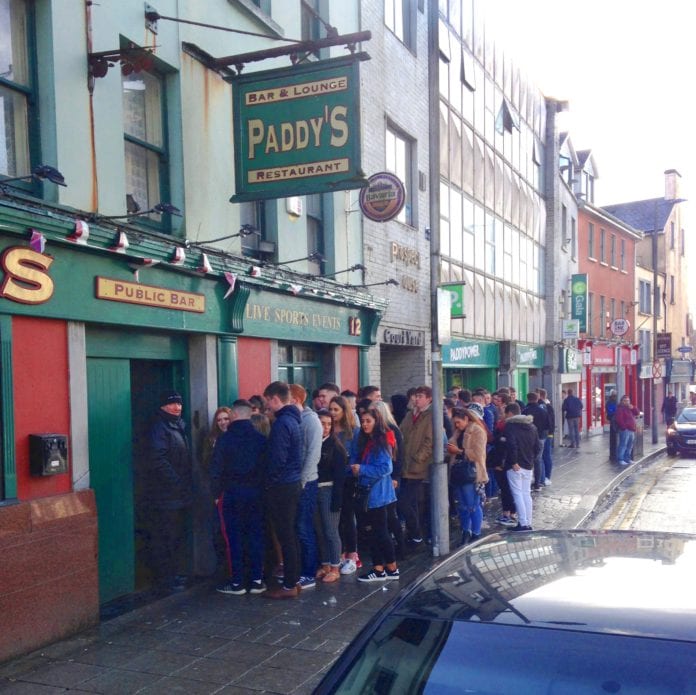 Galway’s pubs are full to bursting with students as RAG Week continues today with Donegal Tuesday.

After a stormy Mayo Monday yesterday – and freezing rain that failed to dampen the celebratory mood – many pubs were already busy by noon today.

Some of the more student-friendly watering holes saw patrons queuing up as early as two in the afternoon.

Started in the UK as student-led charitable fundraising organisations, RAG – which stands for Raise And Give – quickly lurched into Ireland as a full week of student frivolity and ruckus-raising.

But it never forgot its charitable roots. An NUI Galway Student Union post from a decade ago boasts that they raised €32,000 for both local and international charities including Galway Rape Crisis Centre, CD’s Helping Hands, L’Arche and the Belarussian Orphanage Project.

Yet recent years have seen a lot of pushback from annoyed residents and Universities attempting to gain control of what is often deemed overtly and anti-social drunken, disorderly conduct.

Galway in particular has a reputation for a wild RAG week, as it has a high percentage of students – around a quarter of the city’s population.

After one especially raucous year – in 2014, when NUI Galway and GMIT both had RAG week at the same time – the universities’ students unions decided to end the ‘official’ celebrations. Since then, the students have continued the party on their own.

And in spite of this week’s cold snap, in spite of tensions with the universities and the city’s residents, that is just what they are doing.