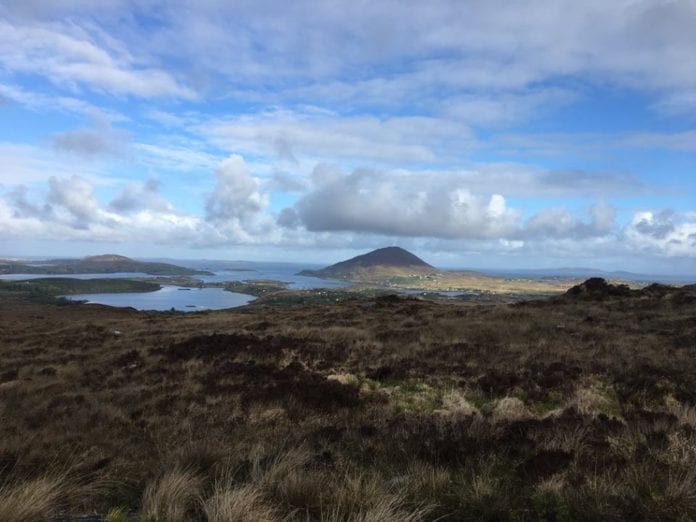 A young Roscommon girl danced on top of Diamond Hill as she and her mother took part in the 5 peaks challenge in aid of Special Olympics Ireland.

The Five Peaks Challenge took place along Connaught’s Wild Atlantic Way on Saturday 12th & Sunday 13th May 2018, with the main aim being to raise funds for Special Olympics sporting heroes.

Truskmore (2,123ft) – which is on the border of County Sligo and County Leitrim. It is the highest peak of the Dartry Mountain range and the highest in the county. It is the highest point on a large plateau stretching across north east Sligo and north west Leitrim. The edges of this plateau are marked by high cliffs. The RTE transmitter is located on top of this mountain.

Benbulben (1,725ft) – is a large rock formation in County Sligo. It is also part of the Dartry Mountain range and is located in an area called Yeats Country. Benbulben is a protected site, designated as a geological site by Sligo County Council. This famous landmark is immortalised in the poetry of W.B. Yeats.

Nephin (2,644ft) Among the most interesting of Connaught’s mountains is Nephin, which has been climbed and revered for generations. Nephin is a majestic mountain, which dominates the landscape for miles around. It is a conical shaped quartzite mountain standing alone overlooking Lough Conn. It is the second highest mountain in Connaught, second only to Mweelrea also in County Mayo.

Diamond Hill (1,450ft) The ridge is a narrow fin of quartzite roughly half a kilometer long, which culminates in a cairn that marks the summit. From here, you can see, Inisbofin, Inishturk and Inishshark. To the north and east, the Twelve Bens are nothing short of sensational. Kylemore Abbey’s gothic turrets stand out from neighbouring Kylemore Lough. Directly north, the summit of Mweelrea can be seen.

Croagh Patrick (2,507ft) Nicknamed the Reek, as it is climbed by pilgrims each year on Reek Sunday, this is the third highest mountain in Co. Mayo. Sitting 8 kilometres from Westport above the villages of Murrisk and Lecanvey, it forms the southern part of a u shaped valley flowing into Clew Bay.

Laura Ganley spoke about why she initially took part in the 5 peaks challenge.

“Myself and my mum Martina took part in the 5 peaks challenge in aid of Special Olympics Ireland on the 12th on 13th May. On the Saturday 12th we climbed Truskmore, Benbulben and Nephin.  Then on the Sunday we climbed Diamond Hill and Croagh Patrick.

“Special Olympics is something that is extremely close to my heart as I am an Intellectual Disability Nurse. I have also traveled to Lourdes the last 2 years with the Irish Pilgrimage Trust bringing kids and teenagers with illnesses and disabilities.

“I am also an  entertainment officer volunteer at the upcoming Special Olympics games in Dublin in June.”

Laura is a 3 time lreland Sean Nós dancing champion from Ballaghderreen Co. Roscommon. She has been dancing for the last 8 and a half years and teaching dance for the past 4.

They raised €1800 for Special Olympics Ireland through taking part in the 5 peaks Challenge over the 2 days. Below you can watch Laura dancing her way to the finish line with Croagh Patrick being the last peak the had to climb. Video Credit: Martina Ganley.