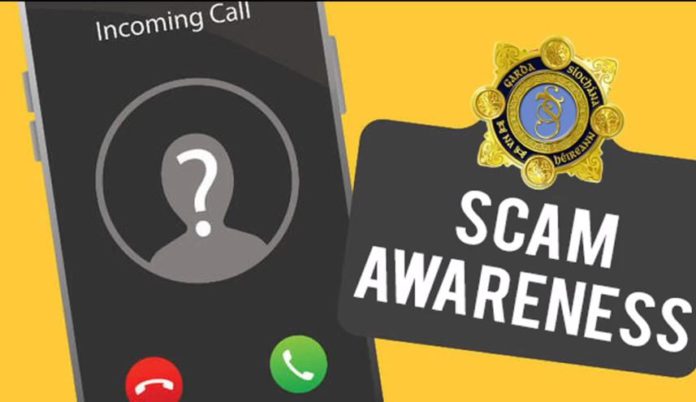 Gardai are warning the public to exercise caution online after recording a massive spike in scam related offences in 2021.

Overall fraud related offences increased by 110% in 2021 according to An Garda Síochána.

An Garda Síochána is asking members of the public to be wary of unsolicited phone calls, emails and texts and not to click on any links.

The most common variety of these scam offences is for fraudsters to pretend to be from your bank, inviting people to click on a link that will bring them to a cloned website, and try and get them to enter their PIN number.

They may also seek other personal data such as address, date of birth, PPS numbers etc.

These are just a few of the online scam offences cybercriminals use to steal your private data.

An Garda Síochána is warning the public to never give away personal data such as bank account details, PIN numbers, credit card numbers, passwords, one time codes, PPS numbers and Eircodes.

If you’ve been a victim of fraud, it’s vital that you change your passwords immediately and report the matter to your bank as well as to An Garda Síochána.

The advice from the Garda National Economic Crime Bureau (GNECB) on scam Vishing, Smishing and Phishing (this can also take place in the workplace) is as follows:

· Be wary of cold calls received. Ask the caller their name, their phone number and if you are concerned hang up and ring your bank / service provider from a number advertised in a phone book, on your bill or from a Google search.
· Just because the number looks Irish does not mean it is – fraudsters use VOIP and spoofed numbers.
· Never act on advice received or instructions from a cold caller.
· Never give away personal data like bank account details, PIN numbers, credit card numbers, passwords, one time codes, PPS numbers or Eircodes.
· Never download any Apps as these allow the fraudster to take control of your device.
· Be aware that State bodies including the Revenue Commissioners will not ring you to advise that you are under investigation.
· Do not transfer money in any way.
· Before taking any action, seek advice from a trusted person.

· Be wary of such texts even if they are contained within the thread of previous genuine texts from banks.
· Never click on links – by doing so you are accessing cloned websites.
· If you’re expecting a delivery and receive such a text, be very careful.
· Banking institutions will never send a text containing a link.
· An Garda Síochána advise people not to respond to such texts, to take screenshots of the texts received and delete them and to report it to the bank or relevant company and local Garda station.

· Phishing emails can look official – make sure you are certain it’s legitimate before opening an attachment.
· Hover over any hyperlinks so you know where they lead to before you click (or go directly to the source).
· Beware of requests for personal or financial details or requests to reset passwords.
· Delete any suspicious emails, block the sender and don’t forward the email to anyone else.
· Don’t store passwords on your browser. If any of your passwords are compromised, it could lead to a chain of disasters and compromise all your accounts.
· Avoid using personal or untrusted removable devices (such as phones, tablets, iPods, SD Cards) on office systems.
· Beware of generic, impersonal greetings, such as “Dear Friend” or poor spelling and grammar.
· Check the displayed name against the actual email.
· Limit what you share online – cybercriminals use information you post online to learn how to gain your trust.
· Stay updated with security policies and best practices.

Man before court over €151,000 cannabis seizure