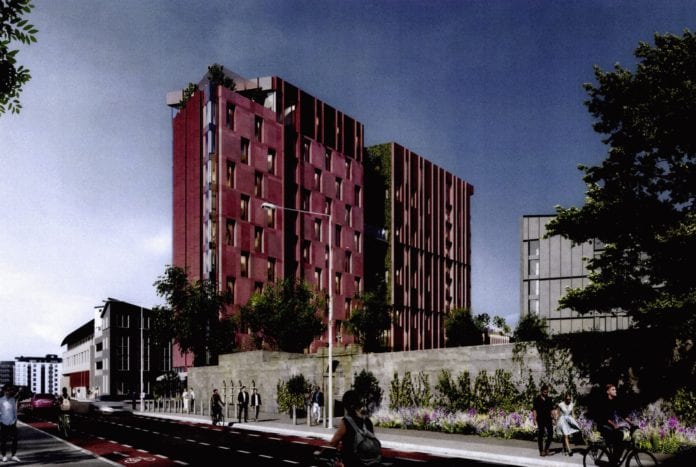 Galway City Council has requested that the developer of a proposed hotel down by the docks revise their plans with a significant reduction in scale and height.

The council is concerned that the proposed 11 storey building would not integrate well into the area, and would have an overbearing on the adjacent cemetery.

Summix BNM Developments had submitted plans to the council for the construction of an 11 storey, 186 bedroom hotel at the corner of Lough Atalia Road and Bothar na Long.

The development would involved the demolition of the unused Coal Yard industrial site next to Forthill Cemetery, and the construction of the new hotel on the narrow lot.

A planning decision was initially due from the city council on November 12, but a request for further information was made asking, among things, for the developer to reduce the proposed height and scale of the hotel.

In its request the council said that the “scale, height, and massing of the proposed development” is excessive and represents and overdevelopment of the site.

This would include an “overbearing expression” onto Forthill Cemetery and the Long Walk, which are areas of conservation.

The building, as laid out in the initial plans do not “assimilate well with the adjacent context context, lacks integration with the existing urban form, fails to achieve the vision and aspirations for urban design set out in Section 10.2.2 of the development plan and is excessive in terms of defining the character and function of the area”.

The council also suggested that designs should be altered to better relate to Forthill Cemetery, suggesting that Summix incorporate natural stone into the design of the northern elevation, where the hotel would border onto the cemetery, and include “public viewing bridges/platforms” on the side over the cemetery to allow public viewing.

Summix said in the plans that it was not proposed to include any parking provision with the hotel die to the constraints of the site.

The city council said that while it was not opposed to a development without guest parking in a location with strong public transport connections, it was a different matter altogether when it comes to business traffic.

“It appears as if the developer is wholly reliant on the use of public road space, by means of a drop off layby, to manage deliveries of goods and services and the collection of waste arising from the operation of the completed development.”

The request for further information was made by the city council on November 11, and the developer has six months to respond, or else the planning application will be considered withdrawn.