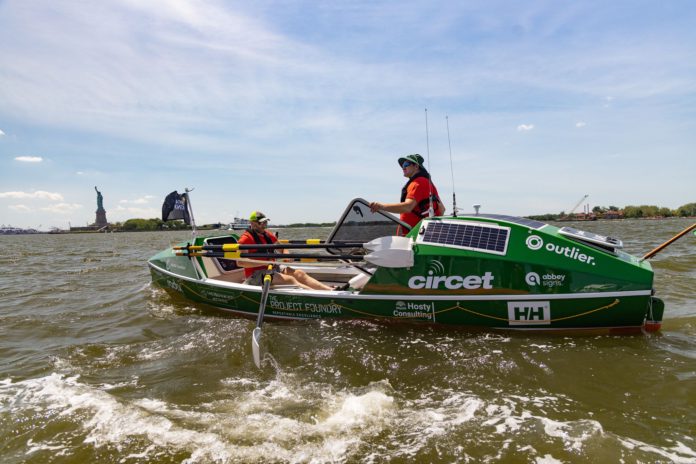 The incredible undertaking of two men rowing across the Atlantic to Galway Bay has become even more challenging, as it is now down to a single man.

Fergus Farrell, one of two men making the 5,000km trip from New York to Galway as part of Project Empower, has had to leave for medical reasons.

Fergus and Damian Browne set off on their fundraising voyage across the Atlantic from New York just over two weeks ago.

However, after 13 successful days at sea, Fergus had been experiencing exhaustion, and was failing to recover despite plenty of rest.

He began to experience tightness on the left side of his chest, and had a very low blood oxygen level.

On June 26, after consultation with medical consultants and the US Coast Guard flight surgeon, it was decided that he had to be extracted from their boat Cushlamachree.

A Singapore flagged tanker, the Hafnia Shenzhen, was nearby and was able to bring Fergus aboard and transfer him to their medical room for observation and treatment, until it docked in New York.

This, however, is not the end of Project Empower, as Damian intends to continue the Trans-Atlantic voyage alone.

“Damian has chosen to remain with Cushlamachree and will now row her solo to Galway over the coming weeks,” a statement from MacDara Hosty of Project Empower said.

He has prior experience with such trips, having previously made a solo row across the Atlantic from the Canaries to Antigua.

“Project Empower wasn’t planned this way, and none of us wanted it to be this way. Gussy and Damian were supposed to do this together and row into Galway Docks together. We are all absolutely gutted that they won’t now get to complete it together.”

“Thankfully Damian has made incredible progress over the past couple of days, so much so that Cushlamachree has clocked her best distance days since the expedition began.”

“This is in no small part due to the massive contribution Fergus made to getting Cushlamachree into the Gulf Stream. Gussy’s immense contribution to Project Empower cannot be overstated.”